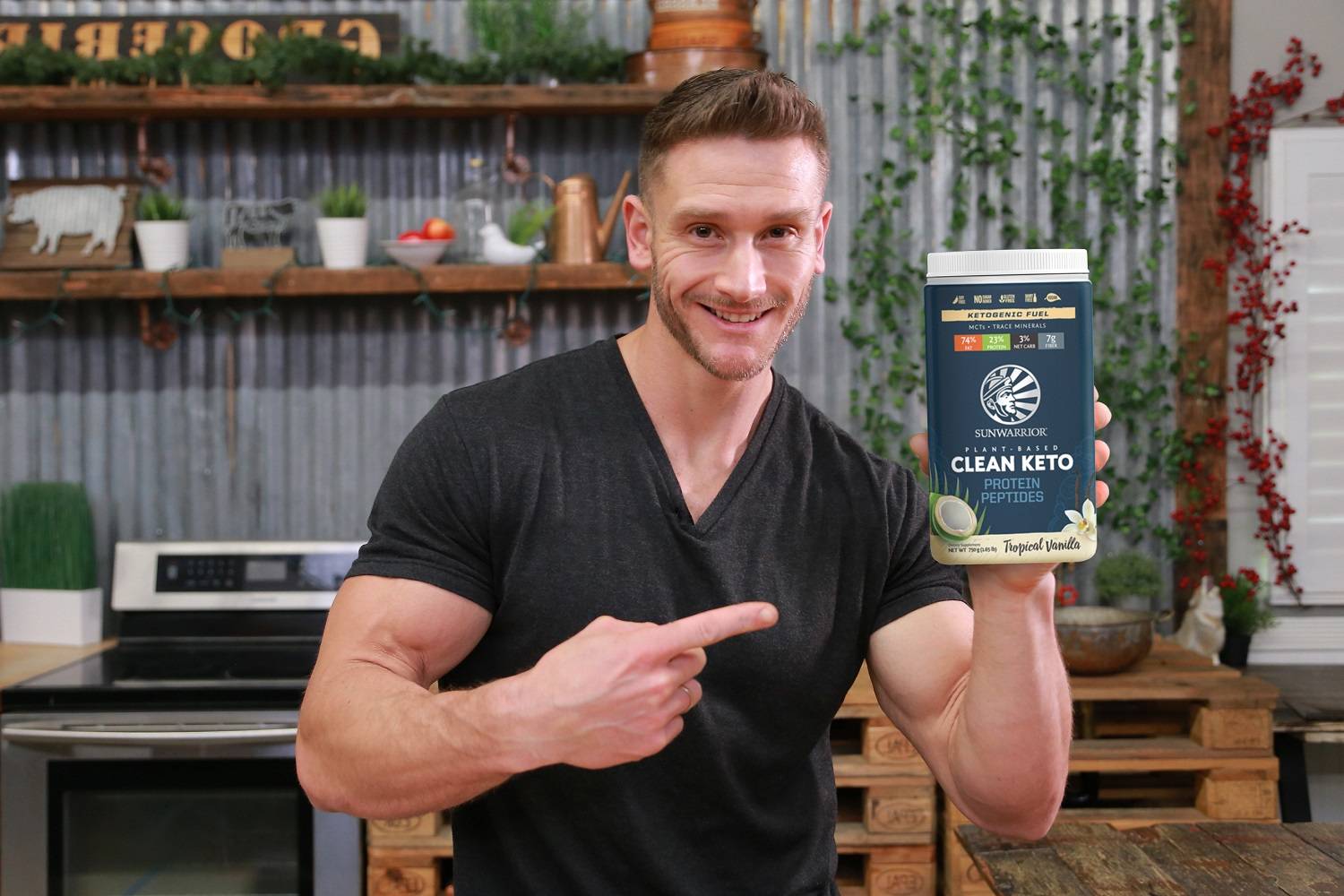 Explore the benefits of keto protein peptide powder and how a vegan ketogenic diet is not only healthy but also doable.

RELATED: Vegan And Keto, Should You Consider It?

The best protein powder for women and men may actually be keto protein peptide powder. To understand this statement, it’s best to learn more about the ketogenic diet.

The keto diet is one of the most popular weight-loss diets right now, and for good reason. By taking carbs out of the equation and eating lots of healthy fats, your body essentially enters a state called ketosis.

When your body is in ketosis, it stops running off carbs and starts running off fat. Your body then starts burning the fat in your body, and you’ll find you lose weight much more rapidly.

If you’ve ever thought a vegan diet and keto diet don’t go together, think again. Sunwarrior’s latest plant-based protein powder has been created specifically to support a healthy, fat-burning lifestyle perfect for the vegan keto diet or any keto diet.

What Is the Keto Diet?

The ketogenic diet, or keto diet, is a high-fat, moderate-protein, and low-carb diet that has numerous health benefits such as:

The keto diet involves reducing your intake of carbs and substituting them with healthy fats. Typically, this means you reduce your carb intake to 5%, increase your fat intake to 80%, and maintain your protein intake at 15%.

This carb intake refers to net carbs, which is the difference between sugars and fiber present in the product.

The concept is this process puts your body into ketosis, a metabolic state. When your body is in ketosis, it becomes very efficient at using fat as its source of energy.

It also gives your body the ability to turn fat into ketones in the liver. This can help give your body (and brain) energy. might even feel more focused on a ketogenic diet.

Keto diets can also reduce insulin levels and blood sugar spikes. The diet is a very effective way to lose weight, which has been proven time and time again.

Research shows the keto diet is superior to low-carb diets that are often recommended to lose weight. One study found that people following a keto diet lost 2.2 times more weight than those on a calorie-restricted low-fat diet.

Another study found that participants on a keto diet lost three times as much weight as those following nutritional recommendations from Diabetes UK.

Being Vegan and the Ketogenic Diet 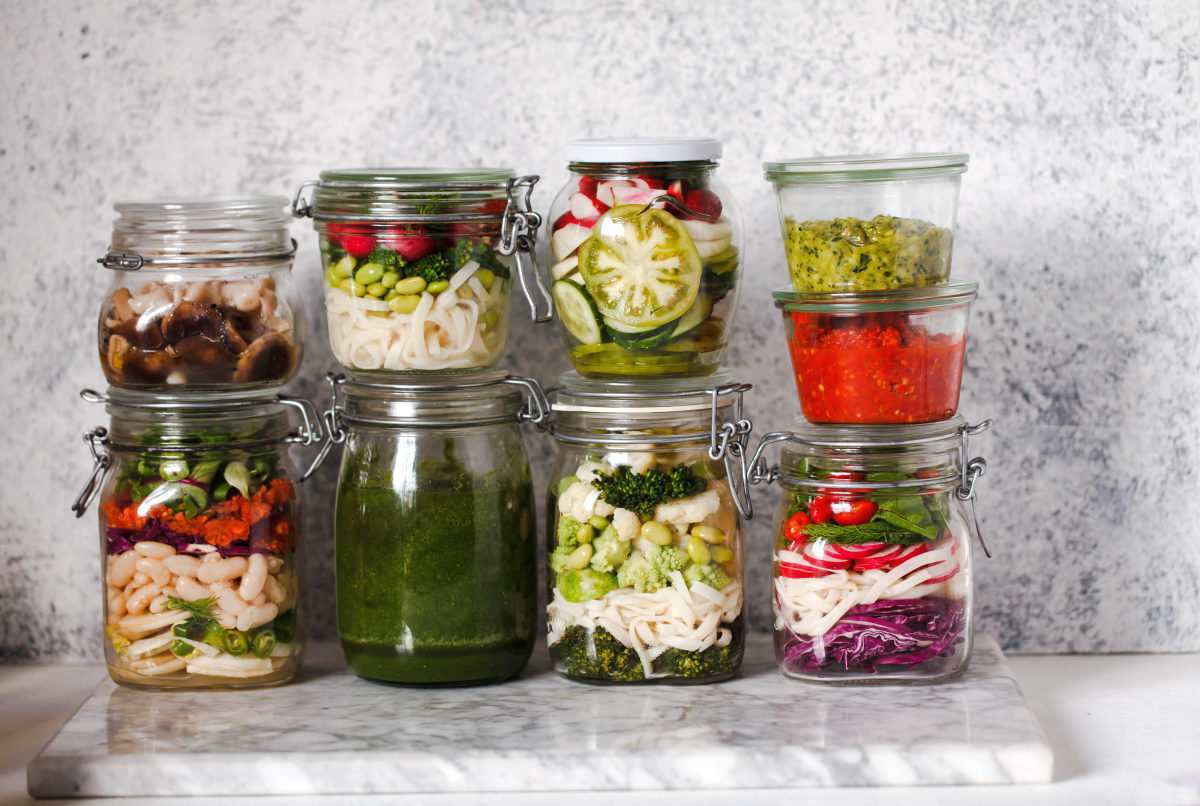 There are a number of reasons why someone may want to follow a keto diet, from helping with epilepsy to controlling blood sugar levels.

But if you want to eat vegan and not harm animals in the process, then the vegan keto diet is the perfect option for you. Being vegan doesn’t mean you can’t reap the benefits of a keto diet.

With the vegan keto diet, especially with keto protein peptide powder, the same principles apply as the standard keto diet. You just avoid animal products as you would normally on a vegan diet.

This way of eating can be applied to a plant-based diet while still keeping to high-fat, low-carb foods.

The keto diet means getting around 75% of your food intake from fats. With the traditional keto diet, people often turn to high-fat animal products.

Several health benefits are linked to both the ketogenic diet and the vegan diet. A plant-based diet has been shown to lower the risk of chronic health conditions.

A review of 12 studies over eight weeks found that people following a vegan diet lost an average of 5.5 pounds more than those on a non-vegetarian diet.

Even if you aren’t vegan, a vegan keto diet might be a great way to get both the benefits of a keto diet and a plant-based diet.

Building Muscle on a Vegan Diet

It’s entirely possible to not only maintain muscle on a vegan or vegetarian diet but also to build strong muscles.

Although carbs are useful in muscle growth as you gain muscle quicker, you’re also gaining fat. When you eat carbs, it promotes insulin release and helps restore the glycogen in your muscles.

Are carbs necessary to build muscle? Of course not.

On a ketogenic diet, you can still refill the glycogen levels in your muscles. The keto diet is great for building muscle.

When the protein intake is moderate, you shouldn’t lose any muscle mass. In fact, you may even find that the keto diet helps you gain muscle.

Your muscles look larger even if you don’t gain muscle mass because of the fat loss you experience with a keto diet.

When the body is in a state of ketosis, it spares muscle from being broken down to provide amino acids for gluconeogenesis, the process of producing new glucose.

One study showed this by comparing three diets with a similar amount of calories and protein but different amounts of carbs.

Researchers found that those on a diet with the least amount of carbs, 30 grams per day, experienced an increase in ketones and more fat loss than the other diets. Lean muscle tissue was also preserved the most on the keto diet.

Eating carbs isn’t essential for building muscle. As long as you’re eating the right amount of protein and calories and training properly, you can thrive on a keto diet, see serious gains, and feel fit and strong.

As we’ve said, a ketogenic diet puts your body in ketosis. When that happens, your energy comes from ketones in the blood instead of glucose from carbs.

This state is when you start to recognize a real difference in your weight loss. Even though this state can be achieved through days of fasting, it isn’t recommended since that isn’t sustainable for weight loss in the long term.

That’s why the ketogenic diet can be so powerful. You feel satisfied and get to eat normal portions but still lose weight since you’re in ketosis.

Being both keto and vegan can feel restrictive, but now with Sunwarrior’s keto protein peptide powder, it’s easier than ever to follow a keto-vegan diet.

It can be difficult to always get enough fat in your diet and adequate protein without eating too many carbs on a vegan diet. Proteins such as beans are also carbs.

That’s why using keto-friendly plant-based protein powder can help you get more protein and fat in your diet without increasing your carb intake. It also explains why it’s the best protein powder for women weight loss.

RELATED: How To Build Muscle And Improve Fitness On A Vegan Diet

Sunwarrior’s brand-new keto protein peptide powder is a fantastic plant-based fat source with 70% MCT oil. MCT oil helps you lose weight quickly, boost your metabolism, and burn the fat you already have stored throughout your body.

MCT stands for medium-chain triglycerides, a form of fatty acids. You can find this in products such as coconut oil.

It is an example of a dietary supplement with exogenous ketones. This means they supply your body with ketones when you can’t produce enough.

Hydration Is Just as Important as Your Protein Shakes 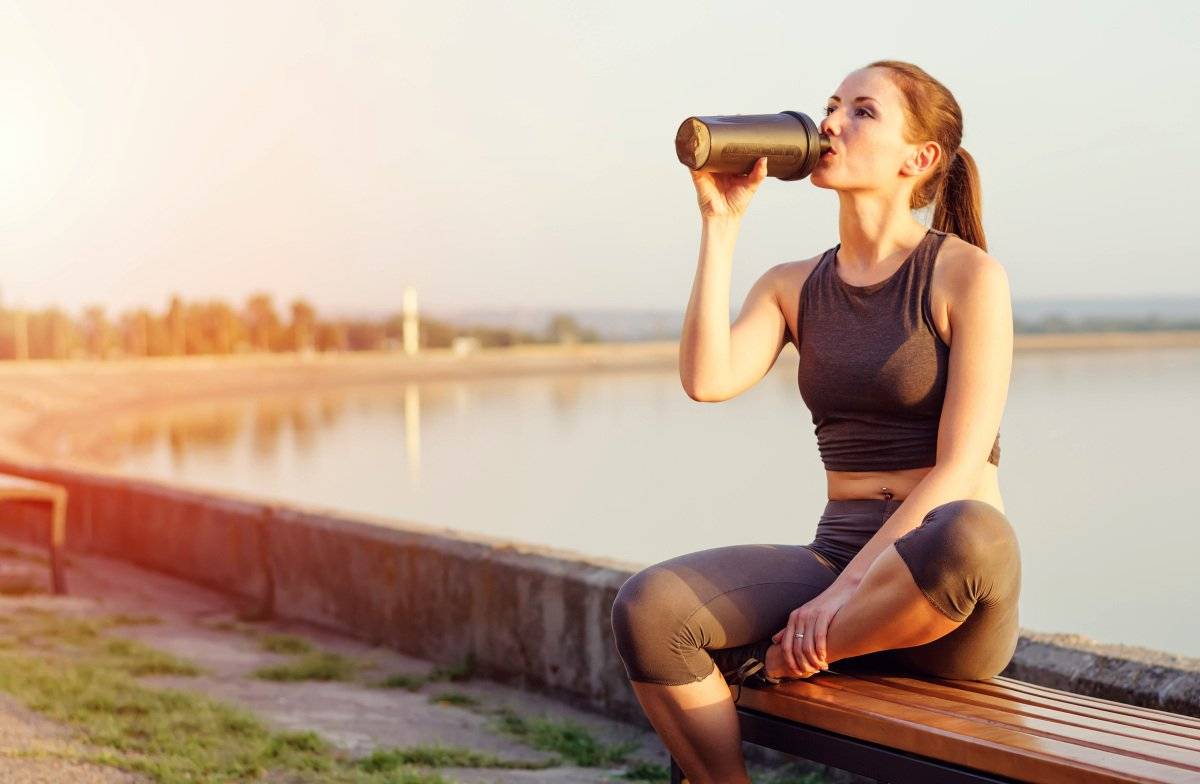 One thing to keep in mind with a keto diet is that once you start a low-carb keto diet, you flush water and sodium out of your body.

When sodium and potassium levels go down, it can make you feel tired and sluggish, giving you the feeling of having the keto flu. It’s important to make sure you monitor your electrolytes and balance your minerals when you live a ketogenic lifestyle.

Electrolytes are salts and minerals that conduct electrical impulses in the body. Common human electrolytes are sodium chloride, potassium, calcium, and sodium bicarbonate. Electrolytes control the fluid balance of the body and are important in muscle contraction, energy generation, and almost every major biochemical reaction in the body.

You’ll feel great and lose weight. The keto protein peptide powder is available in two flavors: tropical vanilla and chocolate flavor (cocoa powder). Simply use one scoop daily with water or add to keto recipes like a keto-friendly smoothie to feel the energy you need.

By now, you already know that protein shakes come in different types, and one of the most popular is whey protein.

Whey protein is a mixture of proteins that come from whey, which is the by-product of production of cheese. One of its primary advantages is how it allows the body’s digestive enzymes to breakdown protein faster or more easily.

You may also come across grass-fed whey protein, which means the source is grass-fed cattle or grass-fed cows. These are farms where are allowed to graze and eat grass.

A keto protein peptide powder still has an edge over whey protein because it’s well-tolerated by the body. 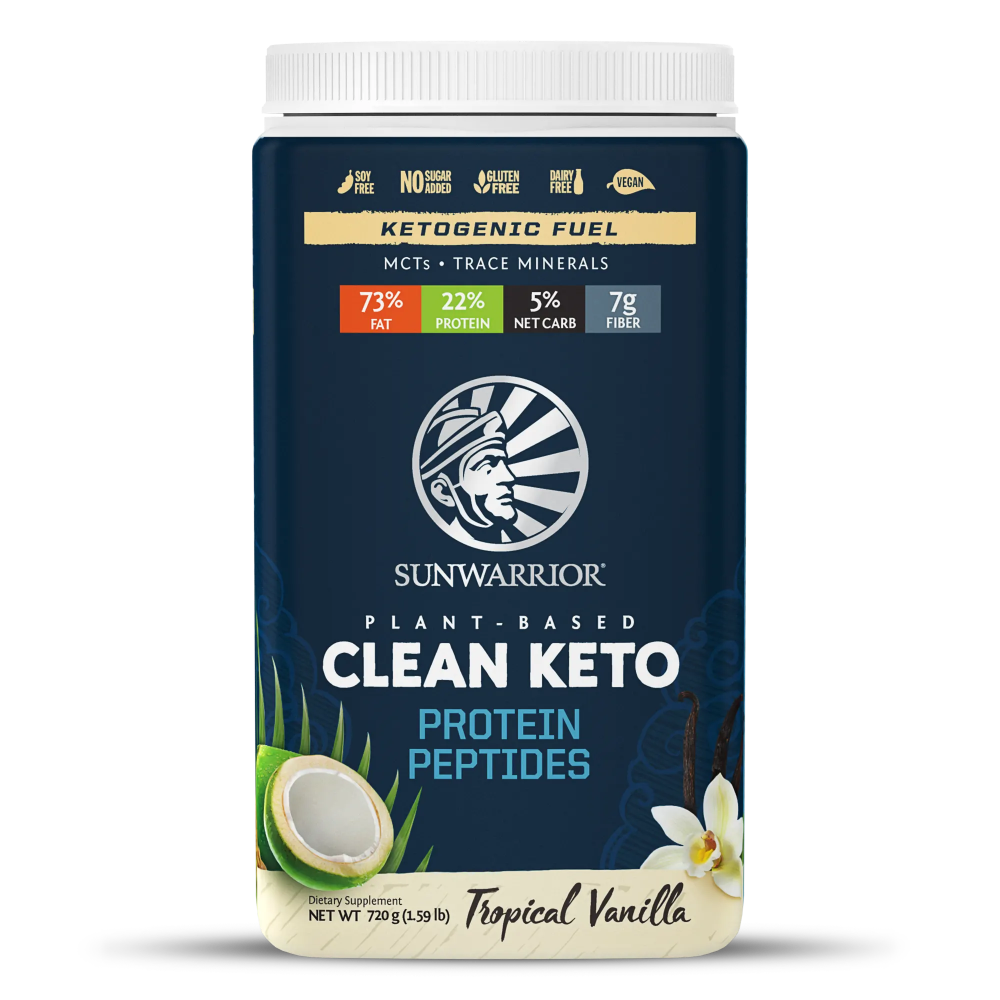 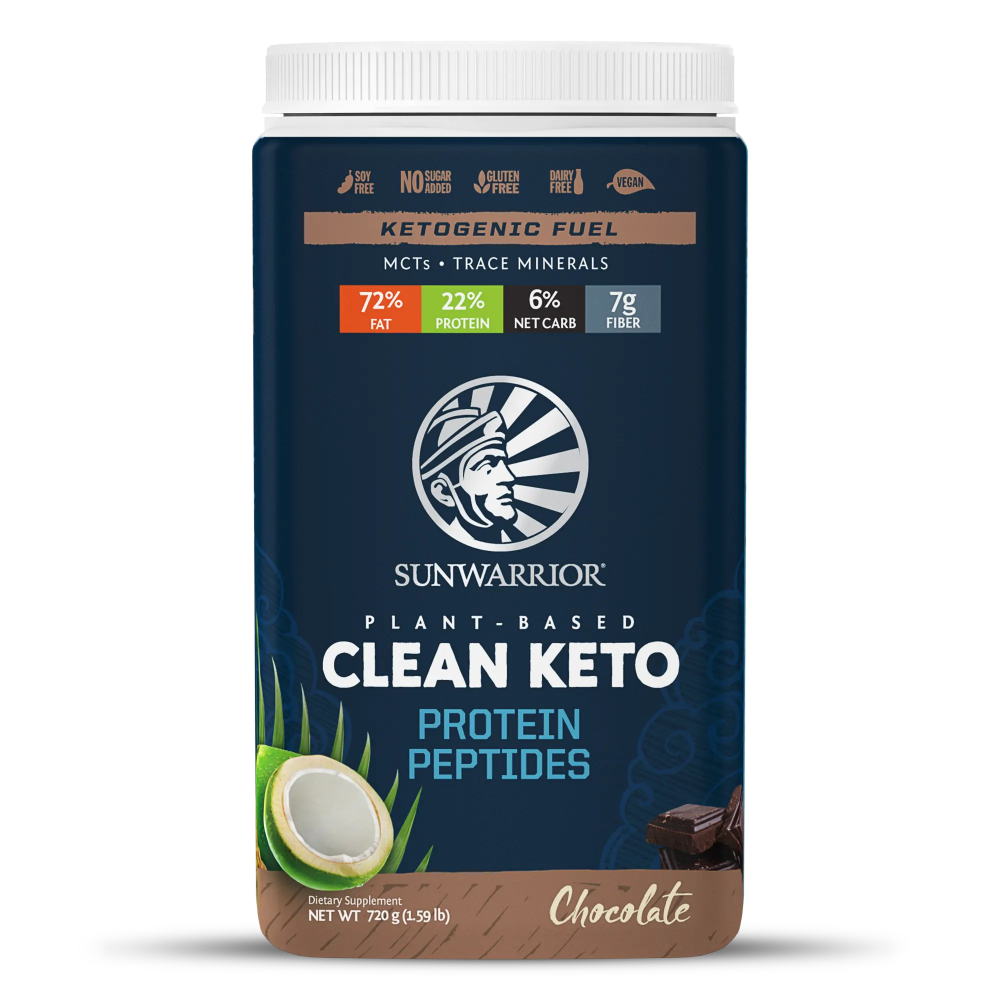 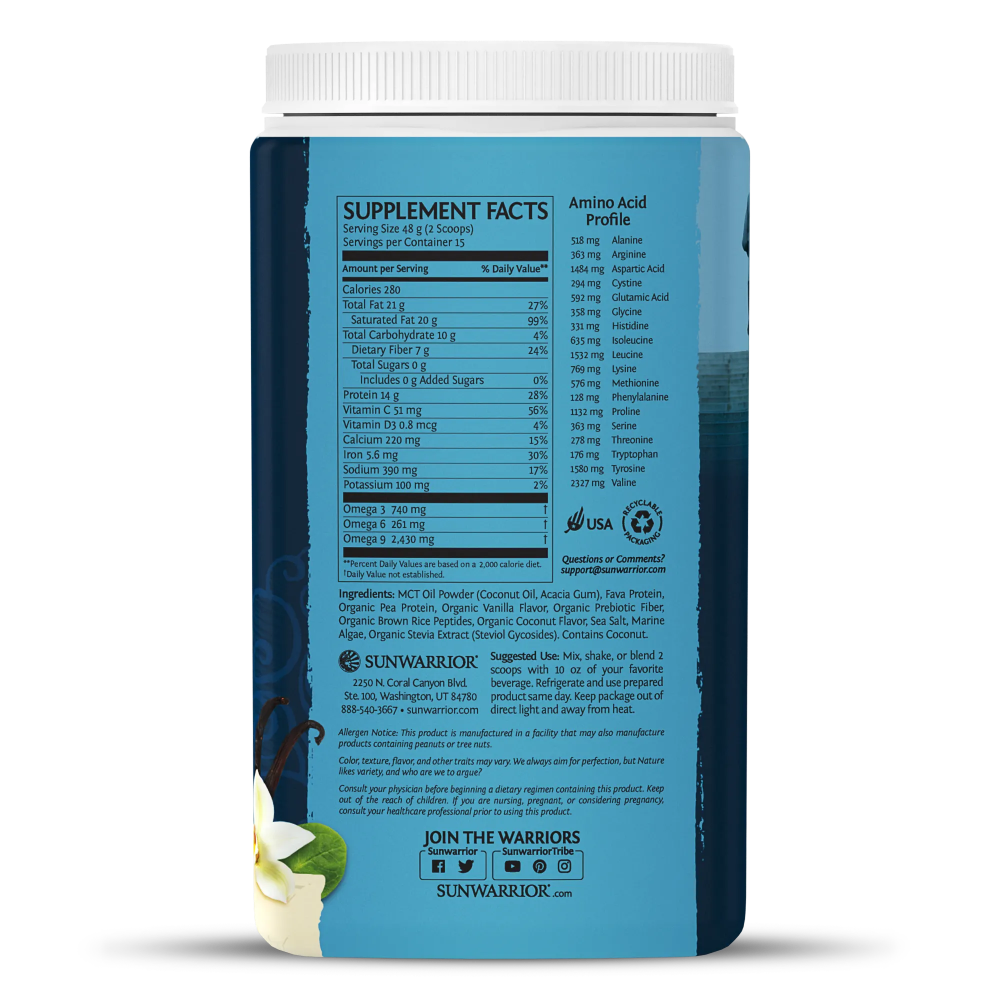 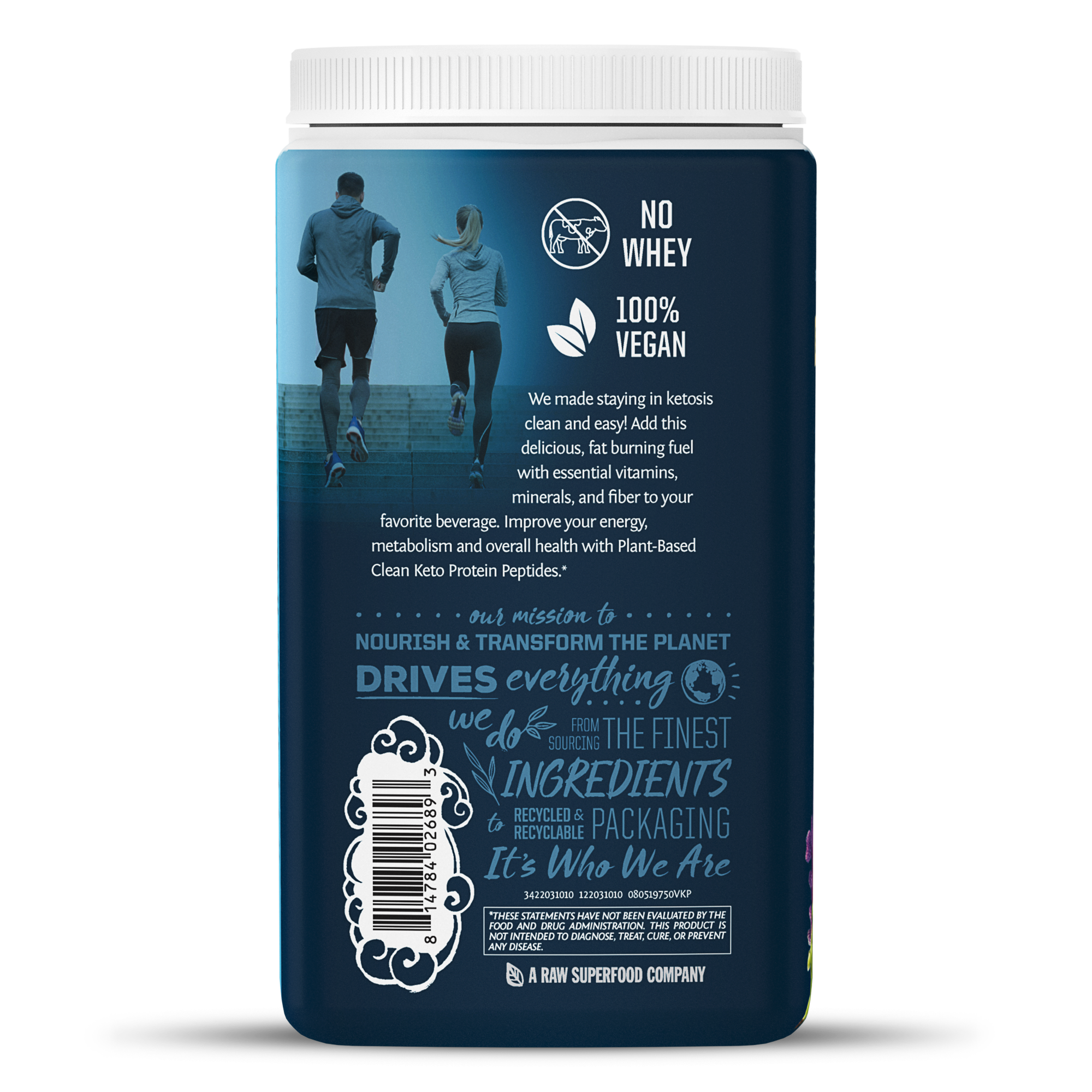 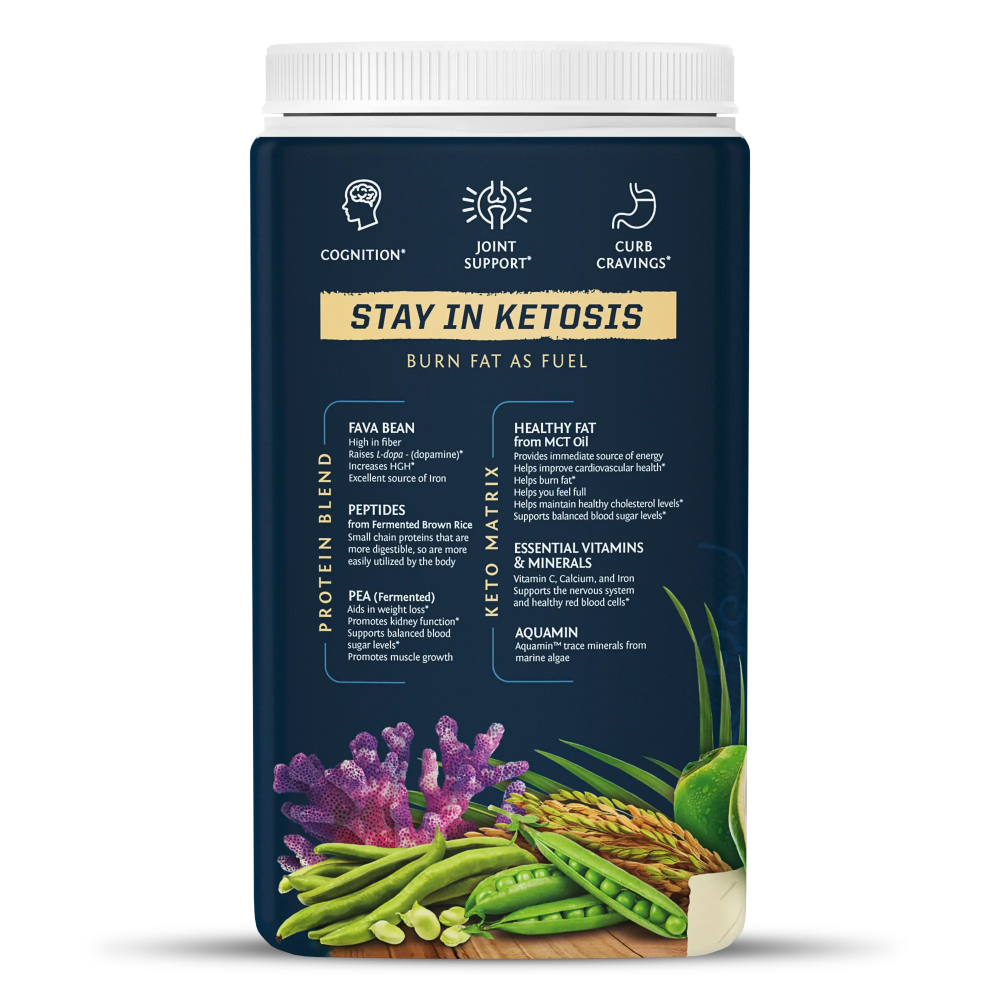 Collagen is one of the vital proteins in the body. Some of the benefits of collagen include the maintenance of skin elasticity and improvement of joint pain.

Collagen serves as the cellular structure for connective tissues and may help stimulate muscle growth.

Most collagen products are made from the bones, connective tissue, hides and hooves of animals. Collagen is a structural protein and is one of the most abundant proteins in your body. When animal collagen is ingested into the body, the long chain amino acids have to be broken down in digestion into smaller chains of amino acids. Then those smaller chains of protein peptides are then reabsorbed and put where they are needed. Not necessarily being formed back into collagen for your body.

That is why you may want to consider using Sunwarrior Collagen-Building Protein Peptides. The protein peptides are already broken down and your body is given all of the building blocks to make it’s own collagen naturally.

Find out how Sunwarrior products nourish and transform you in this video:

A ketogenic diet helps keep your body in a state of ketosis. It can aid in weight loss, potentially reduce seizures, and improve heart health.

It’s now easier than ever to eat a vegan and keto diet with a vegan keto protein peptide powder. You can still follow a vegan lifestyle while eating a keto diet, enhancing your overall health and wellness and building muscle.

How would you use keto friendly protein peptides in your keto vegan diet? Share your tips in the comments section below.